Results: After 8 weeks, 33 patients treated with EA at PC 5-6+ST 36-37 had decreased peak and average SBP and DBP, compared with 32 patients treated with EA at LI 6-7+GB 37-39 control acupoints. Changes in blood pressures significantly differed between the two patient groups. In 14 patients, a long-lasting blood pressure–lowering acupuncture effect was observed for an additional 4 weeks of EA at PC 5-6+ST 36-37. After treatment, the plasma concentration of norepinephrine, which was initially elevated, was decreased by 41%; likewise, renin was decreased by 67% and aldosterone by 22%. UCI researchers have found that electroacupuncture – a form of acupuncture that employs low-intensity electrical stimulation – can reduce high blood pressure in hypertensive patients for up to six weeks. Chris Nugent / UCI “Our studies of several classical acupoints indicate that acupuncture modulates the limbic network, an important intrinsic regulatory system of the human brain. The network shows significant overlap with the default mode of the resting brain. These associated autonomic nervous function changes can be demonstrated by physiological monitoring.”

Objective To evaluate the efficacy of the five ear acupuncture points (Shen-men, Spleen, Stomach, Hunger, Endocrine), generally used in Korean clinics for treating obesity, and compare them with the Hunger acupuncture point.

Conclusions This finding suggests that the five ear acupuncture points, generally used in Korean clinics, and the Hunger point alone treatment are both effective for treating overweight people.

This article presents an up-to-date review of the various neurophysiologic mechanisms that have been proposed to produce acupuncture-induced analgesia.

Figure 4. Schematic diagram of the best explanation of the physiologic basis of acupuncture-induced analgesia.

Journal of Acupuncture and Meridian Studies

The mast cell is the central structure of acupoints and is activated by acupuncture through TRPV2 channels. The mast cell transduces the mechanical stimuli to acupuncture signal by activating either H1 or A1 receptors, therefore triggering the acupuncture effect in the subject. 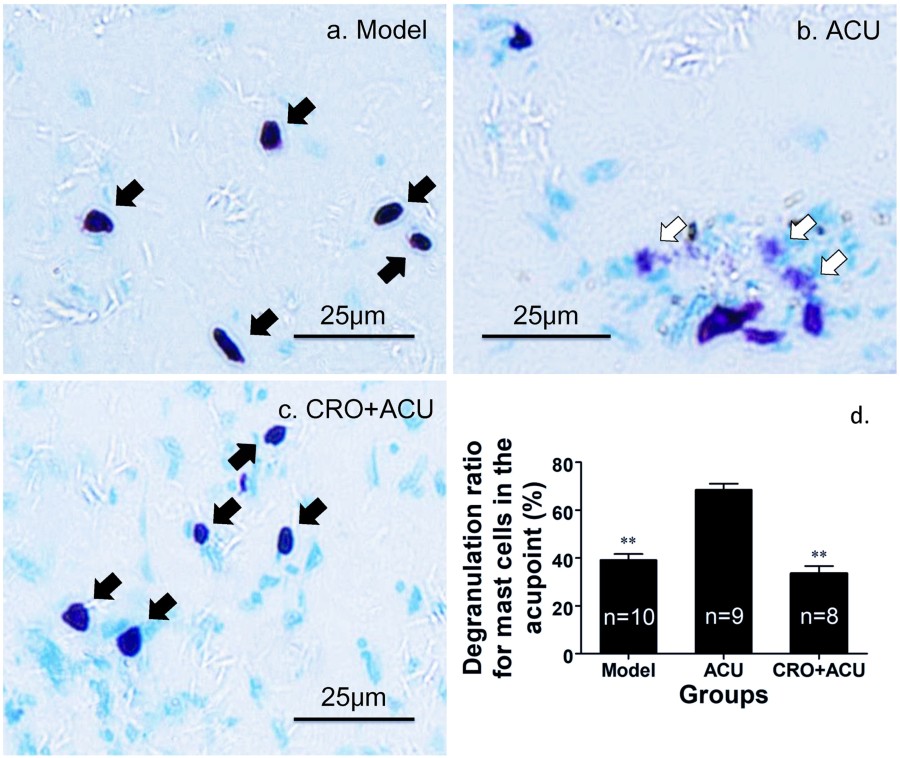 Critical roles of TRPV2 channels, histamine H1 and adenosine A1 receptors in the initiation of acupoint signals for acupuncture analgesia

The participants in the EA group received EA treatment with a mixed current of 2 Hz/120 Hz at 12 acupuncture points (bilateral Zusanli [ST36], Xuanzhong [GB39], Yinlingquan [SP9], Sanyinjiao [SP6], Taichong [LR3], and Zulinqi [GB41]) twice per week for 8 weeks. Depending on the sites of pain, the additional acupuncture point Bafeng (EX-LE10) was available.

“To our knowledge, this is the first multicenter randomized controlled trial to evaluate the effectiveness and safety of EA treatment for the management in PDN. One limitation is that neither a placebo nor sham EA was used as an active control; therefore, the possibility of a placebo effect was not excluded. In conclusion, the results of this study
demonstrate that EA treatment is effective for reducing pain and improving sleep disturbance and quality of life in PDN. In addition, EA treatment was well tolerated and safe during this study. These findings suggest that EA treatment may be recommended as a nonpharmacological treatment for pain reduction in PDN.”